Botesdale is on the A143: In earlier times coaches travelling between Norwich and London passed through Botesdale, using the Crown Inn as a coaching stop. Prior to the opening of the bypass in 1995, Botesdale straddled the A143 and had much through traffic. It is now a significantly quieter village and well worth a visit. Botesdale is located about 25 miles from Norwich and 16 miles from Bury St. Edmunds.

St.Botolph: This saint was a Saxon monk who lived in the seventh century. He died in 680AD. Saint Botolph has been recognised as the Patron Saint of sailors and of agricultural workers but he is more usually recognised as the Patron Saint of travelers. Churches with his dedication were often built at city and town gates, where people would go to pray for a safe journey, or to give thanks for having just made one. A total of 64 ancient parish churches in England are dedicated to him, almost all of them near the sea, and mostly in East Anglia and the south coast. London churches are at Aldgate, Bishopgate Without and Aldersgate. A fourth at Billingsgate was destroyed in the Great Fire of London. St. Botolph is Boston's Patron Saint and it is from him that the city of Boston derives its name. The feast of St. Botolph is celebrated June 17.

The image at left shows St. Botolph as depicted on the Botesdale Village Sign. 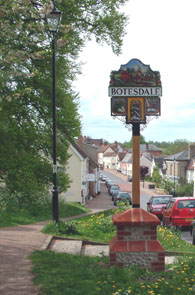 The Village Sign: Crown Hill takes its name from the old Coaching Inn and provides the location for the new Village Sign, erected in April, 2003. The modern name of Botesdale appears on the sign although many villagers still refer to the village by its former name of Buddesdale. In earlier times it was known as St Botolph's Dale. For more information on the Village Sign, click on the picture, right.

Botesdale Market: The Market place, the site of the War Memorial, is today a relatively quiet and calm area but it used to be the hub of much activity. Botesdale Market was founded as a Thursday Market in 1220 and continued until the 18th century. Botesdale was then part of Redgrave and the market's importance was derived from its location on the main road from Bury St Edmunds to Lowestoft. In 1289 there were more than 52 stalls and 14 shops. The Abbot of Bury St. Edmunds, as Lord of the Manor, had a pillory, a ducking-stool and two windmills.

Links with the Past: Although Botesdale has its usual complement of modern homes, a substantial part of the village has been designated a conservation area. Visitors to The Street, the main thoroughfare, will encounter many quaint and picturesque dwellings.

Gas Lighting: In 1862 Botesdale had a Gas Works and the streets were then lit by gas lamps.The Gas Works cost £1200 to build and the gas was supplied at the rate of 9s 2d per 1000 cubic feet. The gas lamp post shown opposite is thought to be the last survivor of the gas lighting used in the 1930's, when it then stood outside the Chapel of Ease. It was refurbished in 1998 and now stands in front of the village hall.